Sudan joined the Stent-Save a Life! global initiative in March 2018 nominating Dr Awad Mohamed as Country Champion and benefiting from a close collaboration with local partners, including the Sudan Heart Society (SHS).

By then, the magnitude of the devastating consequences of STEMI had become evident as both the death rate and the number of disabled survivors had exploded in Sudan in the previous years due to a lack of and/or a delayed insufficient treatment. The exact rate and outcome were unknown as there was no organised system of care for STEMI patients in the country. This dictated the overall primary objective to set-up the structured system of care “Improve STEMI outcome in Sudan” under the lead of the local Stent-Save a Life! team.

The overall lack of coordination among the main stakeholders, the treating cardiologists, the healthcare policy makers (state governments), the ambulance networks and the public, was clearly the main challenge. In addition, the financial constraints of delivering a timely and good quality STEMI treatment as well as the lack of training amongst the first-line healthcare practitioners represented the most formidable system barriers.

In April 2018, shortly after having formally joined the SSL initiative, the national government succumbed to the relentless pressure and approved a 100% free treatment plan for STEMI patients in public hospitals across the country, surpassing the Stent-Save a Life! team’s own expectations whose plan was set as follows: 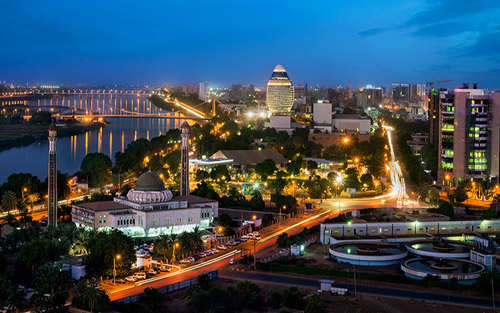 Since the “free stent for all” approach was adopted in Sudan, the volume of coronary interventions for STEMI has soared dramatically, albeit mostly as part of the pharmaco-invasive strategy and with little impact on the volume of primary angioplasties. This strongly highlights the inherent constraint of keeping to a tight timeline and requires commitments that the team is yet to measure up to. It is crucial to reiterate that wealth is not the pivotal point in STEMI care; getting an efficient organisation is, and here is where the Stent-Save a Life! initiative comes in!

Although the intention is to implement the Stent-Save a Life! blueprint in Sudan – based on the Hub and Spoke configuration that features the ambulance service and pre-hospital systems of care as integral parts of a successful STEMI care system – this aspect of the model will be rather prohibitive at this stage as the required resources are not widely available to enable the earlier detection and transportation of STEMI patients. However, legislations are now in place to govern the availability of well-equipped ambulances serving all medical facilities as per the number of beds and manned with trained paramedics. Training ambulance paramedics has proved challenging mostly due to the diversity of the non-nursing background of the majority. Extensive reforms are also anticipated shortly as several players are keenly involved in supporting the transport and transfer of sick patients between facilities.

Simultaneously, Stent-Save a Life! joined forces with PASCAR (Pan-African Society of Cardiology), Sudan Heart Society and the Department of Medical Informatics of the National Ministry of Health (NMOH) to set in motion the preparations for the conception of the STEMI and PCI registries.

Two new cath labs, inaugurated in Elobaid and Marawi in the course of last year, are now fully operating – run by personnel spawned out of the Stent-Save a Life! training program – to cater for patients living in areas located 300-400 kilometres away from the capital city.

The STEMI system of care in Sudan is on the mend now that the right partners are on board Stent-Save a Life!. The team is looking forward to growing the momentum of the programme to next overcome the several obstacles that still exist, namely that Sudan is a vast country in Sub-Saharan Africa with a poor infrastructure hindering the transfer of patients and an on-going political turmoil that might impact the commitments of already on-board healthcare policy makers and MOH executives.