Although Myanmar joined the Stent-Save a Life! global initiative in 2018, the country had already seized, a few years earlier, the importance of improving the medical approach for patients suffering from AMI.

A recent clinical paper, co-written by the Upper Myanmar (Mandalay) Country Champion – Prof Kyaw Soe Win – demonstrates how the Mandalay General Hospital programme, combining the set-up of a STEMI network and the launch of a public awareness campaign, led to a positive impact on STEMI patients’ outcome during the following 2 years, focusing primarily on pre-hospital delay and in-hospital mortality. 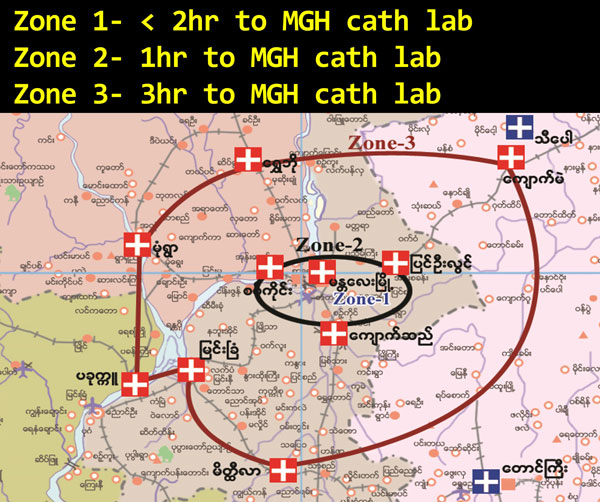 Until 2013, the only treatment available to STEMI patients in Mandalay was streptokinase. Primary PCI was introduced in early 2013 and, two years later, the Mandalay General Hospital STEMI network was set-up and the Public Heart Attack Awareness Campaign launched.

With no official emergency medical service in Mandalay, the general practitioner is the first medical contact for STEMI patients when seeking an advice. The strategy of the STEMI network was to encourage patients suffering chest pain to seek medical help with the GP and get the latter to do the diagnosis and organise the transfer to a pPCI hospital.

The patient transfer was facilitated by a few initiatives such as the use of the phone or the Viber app to provide the STEMI code or direct referral system, the development of STEMI Network Tours to travel to the district hospitals of the STEMI network and provide STEMI network information to both public and private health care providers as well as 2 hotlines to check patient diagnosis, plan referral according to the distance to the nearest pPCI hospital and activate the cathlab for confirmed and incoming STEMI patients.

The public Heart Attack Awareness Campaign was launched the first week of March 2015 during the Heart Attack Awareness week that has, since then, taken place at the same time every year. Public talks on symptom recognition, importance of time and treatment options were held, testimonials were shared by heart attack survivors, educational leaflets were distributed and the campaign was also aired on FM radios. 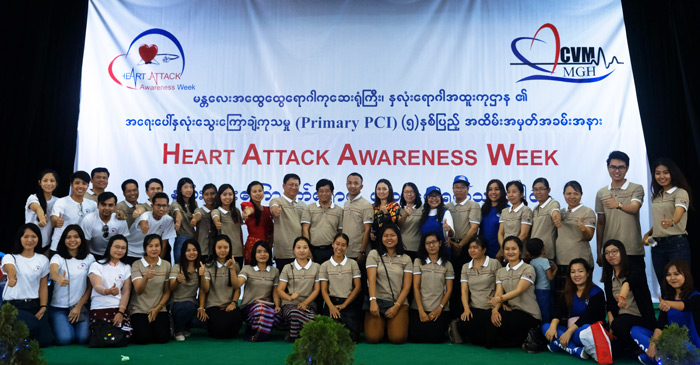 On the healthcare provider side, MGH STEMI network’s objective was to ensure GPs, medical officers and emergency personnel would be able to recognise the STEMI ECG and refer the patient to the nearest capable hospital as early as possible. ECG and CPR courses were organised by MGH STEMI network to train HCPs and the CPR courses were extended to any enthusiastic volunteer social worker involved in the transfer of the patient in case of cardiac arrest.

The impact of MGH STEMI network and the Heart Attack Campaign was evaluated by the means of a prospective observational study including 2,360 consecutive STEMI patients over a period of time divided in 2 phases: the first one covered the 24 months before the MGH STEMI network was set-up (January 2013 – December 2014) and the second the 24 months following the network set-up and the awareness campaign (January 2015 – December 2016).

The results are summarised in the table below:

The results of the MGH study are similar to those of studies previously conducted in Australia, Switzerland, Bulgarian and Sweden. They show that a reduction of the system delay times, an increase of the reperfusion rate and the lowering of the mortality rate for STEMI patients can be jointly achieved thanks to a better public awareness of the heart attack symptoms, the implementation of STEMI networks and infrastructure, training, emergency medical services, reimbursement and the identification of time delays in STEMI networks.

With this study, Mandalay General Hospital demonstrates that the set-up of a STEMI network combined to running a public awareness campaign had a positive impact on STEMI patient outcome. The project led indeed to an increase of the number of ACS patients visiting the hospital, meaning a higher percentage of reperfusion eligible STEMI patients, which, coupled to a reduced mean door to device time, will naturally contribute to a decrease of the in-hospital mortality rate.